The UK rules of lawn bowling 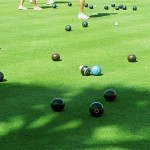 It is said that Lawn Bowls is a game that can be played by anyone aged from nine to ninety and in my time in the game I have come across several nonagenarian players.

It does tend to have a crusty, "old people's game" image due largely to the use of sponsors like Saga and over 55's insurance companies. The reality is somewhat different and at county level in Scotland the average player's age is probably somewhere in the thirties. Competitive bowling can be an exhausting game and in matches players are expected to perform for three to four hours without a break. During these games they can walk two or three miles and bend up and down about 100 times. It's no wonder that bowlers traditionally suffer from both back and knee injuries. Add to that the concentration and effort required and you can see why we need a seat and a few beers after the match!

The Game is played on a Bowling Green. The surface is generally grass but in some of the hotter, drier countries artificial surfaces are increasingly being used. In countries with long winters, like the UK and Canada, many indoor bowling centres have sprung up where the game is played on a carpet like surface. While the weight required to deliver the bowl changes on these surfaces the rules and objectives of the game are essentially the same.

Lawn Bowls are available in different sizes with a mid sized men's bowl being between 116mm and 131mm in diameter. They are made of a hard plastic material which is able to withstand the constant contact between bowls during play. Their weight should not exceed 1.59kg.

Until 2001 all lawn bowls were either black or brown in colour. The rules have now been changed to allow bowls in virtually any colour and the manufacturers have taken up the challenge by producing bowls in just about every colour imaginable, even pink!

During a game players deliver (roll) their bowls up the green in turn trying to finish closest to a smaller white ball called the "Jack".

A bowling green is normally square and the Scottish Bowling Association rules say that it shall be not less than 34 metres and no more than 40 metres in the direction of play. It is surrounded by a shallow ditch.

Surface wear is spread by moving the rink settings laterally and by changing direction of play every two or three days, playing either across the green or up and down.

Rink extremities are marked off by boundary markers with the centre of each being indicated by a "pin" which also carries a number for the rink. The rinks are numbered 1 through 6. Players deliver their bowls from one end to another during an "end" then, when the end is complete, they turn around and play back again.

Lawn bowls are not spherical, they are shaped on one side such that they follow a curved track to the jack. They carry a mark to indicate to which side the bias is applied.

The bowls can be delivered on the "forehand" or the "backhand" depending on the players preference or where bowls that have already been played are located.

The curved path helps the player to find a way past bowls that have been delivered short of the jack. Note that bowls may travel outside the boundaries of the rink during their course as long as they come to rest within these boundaries.

The players must stand on a rubber mat when delivering their bowl. The mat is placed on the centreline of the rink with its front end no less than 2m from the rear ditch or less than 25m from the front ditch. Its position is chosen by the player who throws the jack to start the end.

During an end the bowl nearest to the Jack is referred to as "the shot". You may hear players on the mat asking, "who is lying the shot?".

Games of bowls can involve singles play or teams of two in pairs, three in triples or four in "rinks" games. Matches generally involve a number of teams from one club playing another club. For example a match could involve six rinks or 24 players (6x4) per team.

The jack can be moved by the bowls during play. When a bowl moves the jack it is left in the new position provided it remains within the rink boundary markers. It can also be pushed into the ditch by a bowl. In this case it remains in the ditch and the players must try to play their bowls as close as possible to the jack, at the edge of the green, without falling into the ditch.

A bowl which moves the jack is marked with chalk and classed as a "Toucher". If it touches the jack before falling into the ditch it stays there, remains "live" and may feature in the final shot count. A toucher that remains on the rink and is later driven into the ditch by another bowl is also a live bowl. A bowl that goes into the ditch and that has not touched the jack is classed as being "dead" and it is removed. All bowls which finish outside the side boundaries of the rink are dead.

Bowls is a highly tactical game. This is one of its attractions. It is not always about "drawing" closest the jack. Players must constantly anticipate what shot their opponents may play. For example when a team has a few bowls behind the head, (behind the jack), the opposing team may see the need to place a bowl amongst these to cover the possibility of the jack being moved.

Similarly, if one side is already lying the shot, they may elect to play a guarding shot short of the target area to prevent their opponents from moving anything. These are only two examples and there are many other situations, too many to discuss here, where tactics come into play.

Types of shots in bowling

Well, that's a brief introduction to the game of bowls that should give you some idea what it's all about. Hopefully, for those of you who don't play the game but watch it on television, it will make your viewing more enjoyable.

Now you know the rules of the game you need to find a pair of quality Lawn Bowling Shoes! Look no further as New Forest Footwear has got just what you need!