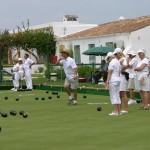 It has been traced certainly to the 13th century, and conjecturally to the 12th! The actual origin of the game is hidden in the haze of antiquity. We do, however, have authentic records of well over seven hundred years of bowling history. Sculptured vases and ancient plaques show the game being played some four thousand years ago, and archaeologists have uncovered biased stone bowls from 5,000 B.C. which indicate our ancestors enjoyed the game of bowling more than seven thousand years ago.

When Caesar rules Rome, the game was known as ?Bocce,? and the conquering Roman Legions may well have carried the game to Europe and the British Isles. By the thirteenth century, bowling had spread to France, Switzerland, Italy, Spain, Belgium, Germany, and England. Bowling was so well established in England by 1299 A.D. that a group of players organized the Southampton Old Bowling Green Club, the oldest established bowling club in the world that is still active. The game became so popular in England and in France it was prohibited by law because archery, essential to the national defence, was being neglected. The French king, Charles IV, prohibited the game for the common people in 1319, and King Edward III issued a similar edict in England in 1361.

Bowling was not prevented in Scotland, where it grew in popularity which increased as year went by. Scottish bowlers developed the present flat green game, established rules, worked out a uniform code of laws, and were instrumental in saving the game for posterity. The ancient game of bowls has always been dear to the heart of every true Scot, and it has always held a prominent place in the history and literature of Scotland. To the Scots goes the credit also for giving the game an international background, as emigrant Scots enthusiastically carried the game with them to all parts of the world.

Today there are more than 200 public bowling greens in the City of Glasgow alone. Every trade group has its own bowling league. Elaborate clubhouses, that completely enclose full-sized bowling greens for winter play, have recently become very popular in the British Isles, especially in Scotland. With this year round play, the game of bowls is reported to be rapidly outdistancing golf as the national game of Scotland.

Lawn bowling, or ?bowls? has much literary and historical proof of being the real ?Sport of Kings.? From the time of Edward III, the game was restricted by royal decree to ?Noblemen and others having manors or lands.? Successive kings played and enjoyed the game. However, King Henry III, who had bowling greens installed at Whitehall, permitted the common people to play on Christmas Day.

Fortunately, no serious effort was made to enforce this ban, and of course it did not apply to Scotland. Almost every English monarch was a bowler, and the royal estates were all equipped with fine bowling greens. King James I was an ardent bowler, as was his son King Charles I. Both monarchs are reputed to have enjoyed playing for high stakes. King Charles, according to bowling tradition, lost over £5,000 in one encounter with a Barking Hill merchant named Richard Shute. A bowling green has been a permanent fixture at Windsor Castle. Anne Boleyn was a bowler, as were many noblewomen, including the first Princess Elizabeth and Queen Victoria. The late Queen Mary, and King Edward V enjoyed the game of bowls. Edward VIII, now the Duke of Windsor, was president of the Royal Household Bowling club of Windsor Castle. His brother, the late George VI, was an enthusiastic bowler and patron of the English Bowling Association.

In the early days, it was fashionable for the aristocracy to have private bowling greens. Samuel Pepys mentions in his diary being invited to ?play at bowls with the nobility and gentry.? Sir Francis Bacon, Sir Water Raleigh, Victor Hugo, and Lord Macauley were all bowlers. British officers installed bowling greens in the American colonies in New York in 1725, and in Port Royal Canada in 1734. George Vanderbilt and John D. Rockefeller had private bowling greens on their estates in 1896.

Sir Francis Drake and Sir Walter Raleigh were in the middle of a game when word reached them of the impending assault of the Spanish Armada. It is said that Sir Francis finished the game before sailing to engage the Spanish; noble dedication, indeed. In fact, he had to wait for the incoming tide to peak before he could get his ship out of the harbour anyway.

In the early days, it was fashionable for the aristocracy to have private bowling greens. Samuel Pepys mentions in his diary being invited to ?play at bowls with the nobility and gentry.? Sir Francis Bacon, Sir Water Raleigh, Victor Hugo, and Lord Macauley were all bowlers. British officers installed bowling greens in the American colonies in New York in 1725, and in Port Royal Canada in 1734. George Vanderbilt and John D. Rockefeller had private bowling greens on their estates in 1896.

Literature, history and art all abound with references to this game, and we can indeed look back with pride on the noble heritage of our Royal and Ancient games of bowls. It may seem a little selfish, but some ?old timers? dread the day when the American public really discovers this game. They picture bowling alleys deserted, golf courses neglected, and tennis courts empty, while waiting lines form at the bowling green; and there will be no royal decree to restrict this game to a favoured few.

Lawn bowling appears to have been introduced into the American colonies in the1600s, although archaeologists have uncovered biased stone bowls, now in a museum at Vancouver, B.C. which indicate that a similar game was played be the North American Indians centuries before this. Bowling greens were recorded in Boston in 1615, New Amsterdam, as New York was then called, and not long afterwards in Washington and Virginia.

In 1726 George Washington?s father, Augustus, took over management of the family estate at Mount Vernon, and in 1732, the year George was born, constructed the bowling green. At this time the game was highly favored as a genteel pastime by the ranking officers of the British Colonial Army, and the green at Mt. Vernon was undoubtedly very popular. George grew up with the game, became an avid bowler in his youth, and apparently this love of the game was never lost. He kept the green busy through the years. By 1754 he had come into his inheritance and settled down with Martha. They kept up the family tradition of sponsoring bowling on the green as ?suitable for the intelligentsia and ranking army officers.? The game abruptly lost its popularity during the Revolution. On July 4, 1776, with the Declaration of Independence, the Colonies were rent apart. Those still loyal to the British Crown fled to Canada, were imprisoned or killed, and their property confiscated. This wartime hysteria swept all thing British with it, including bowling greens. Greens were ploughed up, converted to camp grounds, planted with flowers or trees, and hidden as much as possible. At Mount Vernon the abandoned green was planted with young full grown trees described as a rugged type of magnolia. One of these trees, ?The Washington magnolia,? planted in the garden entrance to the bowling green is reputed to be hale and hearty today. Apparently all local records went too, as our national archives had no record of bowling activity for this period until our first edition. Recent research by the Mount Vernon Ladies? Association of the Union record authentic maps which date back to 1726, locate the bowling green, and confirm our previous reports.

To the Canadians we owe the preservation of Bowling on the Green in America. With peace, the game spread across the continent to Vancouver, and grew in popularity. In time, friendly games across the border began, and eventually old animosities were forgotten.

There is a certain magic in this game that builds lasting friendships, and Bowls has done a lot to cement the friendly relations that now exist between Canada and the United States. The game was not revived in the United States until 1879 when a bowler named Shepplin started a small private club in New Jersey. Soon this expanded to a second club and in 1885 the Middlesex Bowling Green Club was officially organized. New clubs appeared in Boston, and soon bowling greens were once again flourishing along the eastern seaboard. Fourteen years passed before the first West Coast club was formed. In 1899 the St. Andrews Society of San Francisco and Oakland combined to construct the first bowling green in the West in Golden Gate Park.

The first Southern California lawn bowling club was formed in Los Angeles about 1908, and today there are more than thirty active clubs and many private greens in this area.

So there we are! In summary:

There we have a small history of this fascinating sport, we hope you enjoyed our trip to the past!