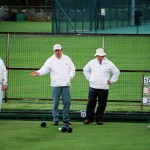 The annual Win Green Trophy competition between Cramborne, Mere and Tisbury took place at Mere bowls club. A pair format was used instead of the usual triples and the result was:

On a drizzly saturday the annual club triples championship was held at Tisbury. The winners were Raymond Adams, Lesley Trattles and John Lindley, with runners up Marian Smith, Jack Frost and David Jones.

We have a great selection of Lawn Bowling Shoes for Men and Women starting from just £18.99!